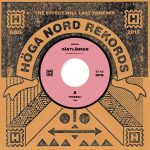 Trippy 7″ with two krautrock inspired psych tracks… on the one hand clearly inspired by the German school of the past and on the other hand also quite modern with influences of techno, dub and ambient… very much recommended!

The Pink Dots release a few records every year… some people collect them… some don’t… I stopped collecting them a long time ago… but I am still a fan… and I check out new release from time to time… here is one recommended to both old and new fans of this cult semi-Dutch psychedelic band… This is an album which is rather soundscape orientated… with some moments which are like songs… the sleeves says 6 tracks… but I experience them more as two (one?) long trips… recommended!

Here is an excerpt and here in another excerpt…

Bronze – In Stone (Burka For Everybody)

Lend Me Your Underbelly – Giant Tadpoles Among Us (Epigentic Records)

Here is a relatively new talent from Holland for you… Lend Me Your Underbelly plays lo-fi music for you… feels a bit like improvisational music or field recordings at times… but in the end this is lo-fi psychedelic stuff for fans of Fonal, Morc and Vrystaete… highly recommended!!

Bronze – World Arena (Not Not Fun)

Here is the second album by neo psychedelic outfit Bronze. Post punk driven trance indulging songs as Bronze has been known for since some years… still the songs are crafted better as before and the album is a very cohorent piece truly made to make you trip… excellent!

Second album by Group Rhoda… and like the first one this is an amazing piece (but sounding a bit more mature) what you might call exotic wave… new wave and post-punk influenced psychedelic pop songs done with electronic means… fragile and dreamy and soothing… simply wonderful!

80’s psych / krautrock from Jonas Palm. Only one more LP was released by this artist back in 1980. Excellent stuff as always on Börft. Most have for acid heads, astral travellers and music collectors alike!

Samling keeps putting out little gems for the truly adventurous listeners… here is tape from the USA based Future Shuttle. Psychedelic and spacey ambient tracks… flirting with electro-acoustic and improvisational music. Just perfect for dusks and dawns…

Amazing split release by these two psychedelic bands. Both have a lo-fi sound with some indie touches… think about Indian Jewelry but less song based. Viking Jews deliver one long piece and Smycken serve us four tracks. A must experience trip!

Debut album by Eklin from Holland. Simply a super trip through ambient structures, pop sentiments, lo-fi noises and psychedelic moments. A sparkling debut album that makes me very curious for the future!

The exicting debut EP by Dutch indie/shoegaze/psychedelic/lo-fi band Eklin. This 4 track EP cd is released on the band’s own label Lowin. Musically you get some experimental ambient like tracks and two more indie/lo-fi/psychedelic pop tracks. Really a band to keep an eye on! Also check their debut album (see above).

cd, 4 tracks
Price: 2 euro (only 4 copies left)
Special deal –> order for a minimum of 25 euro of other records and get this one for FREE…

A perfect blending of minimal electronics and psychedelics… touches of 80’s music and 70’s and 60’s stuff… all in the mix and resulting in the unique sound of the band. Two excellent tracks for dancing, tripping and day dreaming…

Solo project by bassplayer of Eklin. Woud is another great Dutch upcoming project. Haunting (dark) ambient that could have come from Scandinavia. This sounds like the ambient side of Burzum, when he is happy… or the most dark stuff released on Fonal. Superb and adventurous ambient that has nothing to do with all the clichés mostly heard in this genre. Big tip!!

Beequeen – Time Waits For No One (Herbal International)

Originally released on Staalplaat in 1994 but still the music is as impressive and up to date as can be. This is truly a perfect soundtrack to doze off with and dream of other worlds. A fantastic trip into the unknown with excellent electronic music and sounds. Happy dreams!

cd, 9 tracks, digipak, limited to 1000 copies
Price: 2 euro (only 2 copies left)
Special deal –> order for a minimum of 25 euro of other records and get this one for FREE…