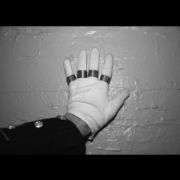 One night is not enough…

Bronze is a relatively new band from the USA West Coast scene. But members include experienced musicians from Vanishing (who performed at the Hex nights) and Spector Protector. Originally Bronze were planned to appear on the Radio Resistencia compilation but in the end this 7” was imagined and realized.

This new combo brings you some crazy and twisted synth / post-punk sounds. They really push genre boundaries far beyond their normal restrictions and come up with neo psychedelic dada-istic lounge and exotic cabaret tunes.

A One Night In Mexico

B Hymn Of The Night Shepherd

“…the band hollows out the inside of an ARP 2600 and rides its plastic carcass all the way into the pits of hell, picking up the bones of a million dead post-punk/synth-punk bands along the way.  You’ll be picking pieces of Throbbing Gristle out of your teeth as “One Night in Mexico” shifts gears from menacing to terrifying, a barrage of white hot synth shrapnel and lacerating guitars threatening to take you head off even before you can flip the record. The B-Side isn’t any tamer, with a whiplash rhythm that can’t sit still for more than a second, perhaps that’s because it’s getting poked, rammed and prodded with all manner of scorpion synth stabs and screaming that sounds like it was recorded through a trash compactor.” (Impose Magazine)