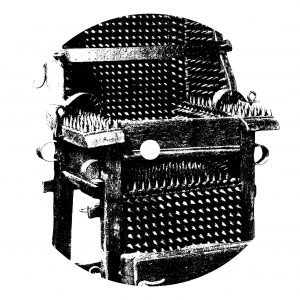 Futuro de Hierro, hailing from Barcelona, is the project by one of the Màgia Roja label/club/community collaborators… mostly known for this work with Dame Area but his solo project Futuro de Hierro is equally (or more?) interesting… the loud repetitive broken beats, noises and powerful delivered Spanish vocals make up for a punk influenced industrial techno sound which borders rhythmic noise at times… like something in between Liaisons Dangereuses, Esplendor Geométrico and Sonar…

“Angry, abrasive and thoroughly menacing, but in a ‘still would drop in a club’ kinda way, Futuro De Hierro prove there will always be a place in Spanish electronic music culture for industrial-leaning EBM chaos that forgot how to take prisoners long before any prisoners were up for the taking. Heavy, heavy music that’s not for the faint-hearted, if the movie Blade had been real and there actually was a vampire club this is likely to be something along the lines of what would be played. Don’t be scared, though, it’s definitely worth braving the harsh edges at work here. ‘Las Fuerzas Grises’ is a broken beat joy that could pound any dancefloor into submission, whispered and barely-audible spoken word vocals adding to the feeling of future punk. ‘Costumbres Y Medidas’ is industrial techno along the foreboding dread-filled drone lines, ‘Construir’ sounds like ‘Machine Gun’ by Portishead finally found its warzone.” (Juno)