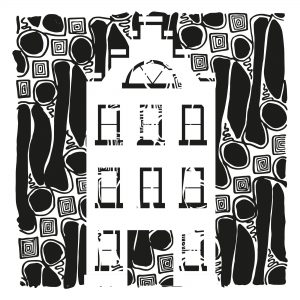 This record by Lend Me Your Underbelly has been imagined for a long time…  but some things need time to be realised… The Dutch one-man band was previously active in the black metal scene and is since 2011 exploring a mesmerising and surreal side of music, fueled by improvisation, nature and spirituality.

The result is lo-fi ambient-psychedelic-drone music with folklore touches… or something like that… imagine The Music Of Erich Zann maybe… For these recordings a bulbul tarang… a string instrument also known as Indian Banjo was used… and next to this Lend Me Your Underbelly is dreaming away on an acoustic guitar, a mandolin and with subtle electronics… simply to create some wonderful surrealistic dreamscapes…

A1 Residue
A2 That Weasel Came Back

“Vrystaete has guided us to some holy places in the European underground in recent years – introducing us to the likes of Brannten Schnure, Blessum, Interbellum and Bebe Fang, coaxing career-best recordings from Brunnen – and their latest excavation, from Lend Me Your Underbelly, is another relevation. It’s the solo project of a Dutch artist roots in black metal and and now improvising  dronal, tripped-out, into-the-woods folk themes with bulbul tarang (behave!), acoustic guitars, mandolin and daubs of ultra-minimal electronics. Check the clips – I’m struggling to think EXACTLY what it reminds me of, but have no qualms bandying around sainted names like Brethren Of The Free Spirit, Thuja, In Gowan Ring, even ISB…It’s beautiful, mesmerising music, and though resoundingly unaggressive it feels psychologically HEAVY, possibly communicating that special order of desolation that comes from spending your brightest days of your youth alone, in corpsepaint, thinking up inventive ways to murder people.” (Low Company)