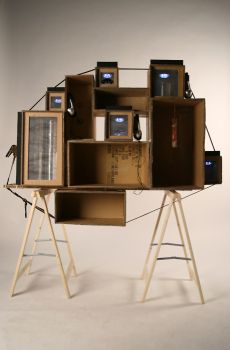 What is in the box?

Especially made for Enfant Terrible by Studio Dixi as part of an assigment to investigate how to bring visual art and music (the music of Enfant Terrible that is) together. Inspired by Pop Art, Trash Art and Dadaism this installation is a way to discover music and art objects. Music is brought to the attention by objects that reflect the nature of the music, and the art objects are presented by a composition through a headphone. These compositions are especially written for these objects. The first generation of art objects for the Art-O-Matique are the Transformer Pins (ET009), the Strekenboekjes (ET010) and the Wifebeaters (ET011). The first music releases realized for the Art-O-Matique are The War Of The Worlds by Neurobit (ET007) (including the Space Invaders art objects) and the Diverse Artiesten tape (ET008).

As part of this project also another unique art object was realized… the Knitted Dixi (ET012).