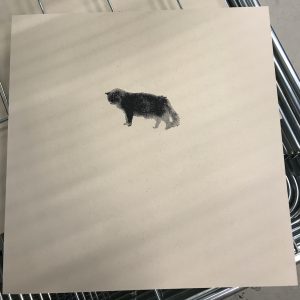 Behind Teahouse Radio is Pär Boström… a Swedish ambient musician, visual artist, label/publishing house owner. Together with his sister (also musical partner in crime) he runs the label/publishing house Hypnagoga Press. Most of his music projects are released on this label. But his work has also already found its way to well known labels such as Cyclic Law and Cryo Chamber.

Teahouse Radio is one of the many projects by Pär Boström and most lo-fi and to my ears the most melancholy… and thus fitting Vrystaete very well… In 2018 the debut album (and only album so far) “Her Quiet Garden” was released on CD in an edition of 100 copies on Hypnagoga Press. Here (and below) you have a really nice video on the process of the music and artwork being created… The songs themselves were composed from 2004 onwards with intervals and recorded in a few days during late summer 2016.

This 2LP vinyl edition of “Her Quiet Garden” captures the delicate, fragile and minimalist soundscapes very well… and features three additional pieces from the same sessions which were never released before… Expect acoustic instruments that are blended with electronic equipment, forming a sombre ambient music of tinkling tape loops and humming pedal drones… like Gurdjieff meets Eno in some sort of way… And… it is also a very personal album and any listener who sits back and pays true attention will witness and experience this.

This is what the musician himself says about the album: An album about summer houses and winter towers, about the changing of weather. How one feeling changes to another. The loss of a loved cat. A real garden becoming an imaginary garden. Depression as a pond. Years of therapy and music as the main counterpoint. About escapism. Psychoses. A giant who walked in and out of the world, decorating it nicely. An aural tale. Half in water, another half in the northern woods. Childhood through nostalgic binoculars. A wardrobe to another place, a gentle knock on the door in the oak tree.