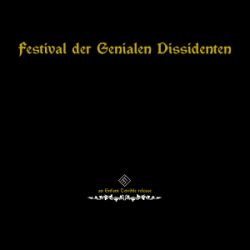 All who truly live are dissidents…

Two years ago Enfant Terrible released the Electronic Renaissance compilation LP (Enfant04). A record that is now considered a cult item, and one of the highlights in the Enfant Terrible catalogue. This record functioned as a reflection on the contemporary state of elektro wave and as an impuls for new talents in the field of independent electronic music.
With Festival der Genialen Dissidenten Enfant Terrible releases a new compilation with again only contemporary artists. On this record there are only projects that were not present on Electronic Renaissance. Next to that the variety of sounds and moods is broader as on the previous compilation. We are proud to present this new gathering of musicians who are all independent, open minded and full of passion about their work.

Experience our dissident electronic music: electronic sounds not fitting everyday elektro and pop music definitions. We do it like nobody else does it or dares it….

The compilation comes on a 12″ LP and a 7″ single, in a decadent gatefold sleeve with a thematically fitting painting by Maaike.

A1 Agent Side Grinder – There Is A Sound That Always Goes Out
A2 Dolina – Corridors
A3 Vincent K. – White Sheet Glory
A4 Nosztalgia Direktíva – Here I Am
A5 Adolf Filter – Inner Walls

B1 :Codes – Waiting For The Signal
B2 Le Triangle De L’Androgyne – The Androgyne Triangle
B3 Pierre Normal – Orage
B4 Yseult Descieux – Catch A Dream

“…Song for song , Festival… is as spotless as Electronic Renaissance, but actually succeeds in surpassing its predecessor by being even more cohesive and dramatic.” (Z Gun)

“Festival der Genialen Dissidenten is a great compilation and worthy to serve as the sequel to Electronic Renaissance. It is wise to remind that Enfant Terrible doesn’t release your regular music and that they have chosen to show us the weirder music that is made in the world. It is good, fun and experimental. It is the choice to make for one who is waiting to broaden its views.” (Heathen Harvest)

“…There isn’t a duff track on the album but some of the highlights include Agent Side Grinder’s evocative/magickal “There Is A Sound That Always Goes Out” that mirrors Coil’s work circa “The New Backwards”/later-TG, the amazing Vincent K’s “White Sheet Glory” that crosses Billy Synth-style keyboards with an amphetamine motorik appeal and throat-shredding vocals that make it sound like the most manic La Dusseldorf track of your life and the midnight stylings of Adolf Filter’s beautiful Harmonia/DAF/Kraftwerk-esque “Inner Walls” cut up with the kinda fractured loner vocal that could almost be Peter Jeffries.” (Volcanic Tongue)

“…This is a fine compilation of electro/ post industrial sounds to bop along to. The Dolina track got Brian very excited as it reminded him of a proto Ladytron. There’s no one here I’ve heard of aside from Pierre Normal and Agent Side Grinder though the charmingly named Adolf Filter intrigued me greatly. A strong comp if you’re into those early electro sounds.” (Norman Records)

“…Dolina (smooth and black electric wave) and Vincent K (mix 80’s EBM with 90’s EBM vocals) tend to make me more interested in this LP. Other extremely interesting acts on this compilation are: Codes (reminds me of Front 242 A LOT!) and Yseult Descieux which closes the LP with a soft, nice psychpopsong. All in all this LP contains some very interesting stuff of which I can’t wait to hear more about.” (Mashnote)

“…“Festival Der Genialen Dissidenten” is a real pleasant listening bringing us back to the good-old 80s electronic vibes. The first part reveals the excellent Dolina-project with a cold-electronic piece with female vocals and driven by a typical rhythm box sound. Another noticeable cut comes from Adolf Filter. The 2nd part of this album starts with the cool :Codes. The project coming next is Le Triangle De L’Androgyne, which delivers an outstanding piece of minimal electronics in the purest 80s vein. These projects are just the most noticeable ones (on the album, ed.), but they all definitely have potential. (Side-Line)

“Be sure to purchase a copy of this compilation and you’ll have the key to new fantastic electro analog independent music!” (Chain DLK)