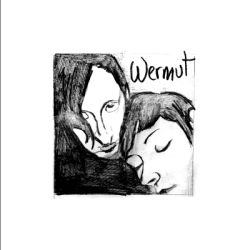 Unexpected but very much wanted…

This record was not planned but it just happened during the preparations for the first Enfant Terrible label night in Bruxelles 2008.

Wermut does not need much of an introduction. The duo has produced some of the finest and best electronic songs and sounds of the past few years. They were present on the Enfant Terrible productions Electronic Renaissance and Hoera! Een Hex voor thuis! and they already performed several times at Enfant Terrible events. So, it might not come as a surprise this is one of my personal favorite bands from the last few years.

On this 7″ Wermut serves you two intense and melancholy songs. These songs are from the archive (recorded in 2003) but more then worthwhile to be made available at last. Both are addictive: one for the dancefloor and both for listening at home in good companion. This is all you might expect from Wermut at their best!

Please note: at the time of the production and the release of this record Enfant Terrible had no knowledge of the fact that the track ‘Away’ had an origin any other then the Wermut studio. Only after I was contacted in August 2009 by a visual artist who told me he took part in the production of which Wermut took a sample to built their track I discovered this. Of course I apologize to the people involved in the original piece for using this without asking them for permission and for using it without any reference to the original piece on the record.

Here are the credits for the original piece of which Wermut took a nine second sample which was used as a loop to built their track ‘Away’:

“…These 6 minutes is true and the greatest melancholy, which I can imagine. It is as touchable as the smell of the morning fog in the autumn or leaves falling from trees during walking in the park. … Feelings that I have found here would be enough for many LPs. It is only 6 minutes. 6 minutes, which are not only a music. 6 minutes of what? Check this out on yourself, I am out of here.” (Apostazja Magazin)

“…The black and white sleeve, the one word titles and the faux-explosion that opens the flipside sums up the fear and nostalgia of our once fearful past. If you like the Dutch Trumpett label and all things eighties and electro-pop then you’ll more that thrill to this.” (Norman Records)